(Note, if you see &gt; or &lt; replace them with < and > respectively.  WordPress messes them up)

Well, I am sitting in a NetApp Cluster Mode 8.1.x, and looking through the performance section.  And we had some discussions.  I figured it was time to share some of the information I have posted before with graphing with powershell and also more advanced…

In the past, I had used 3D modeling in the Stats package R, to do 3D modeling of the CPU on a san.

Here is a video of what I am talking about:

This was the customer referenced in 2 previous posts, where their DFM and alerting software was using the incorrect counters, and saying their CPU usage was 85-90% CPU utilization.

The moment you stop being a lame, and start loving a stats package like R, your life will because supercalifrigginlishious!  R basically kicked matlabs ass, and its freaking free!

What you will need:

Depending on your operating system, the requirements for Hexbin and RGL may need other software packages.  Possibly OpenGL, possibly other stuff

In R or R-Studio, this is how you install the packages:

Reference my other post on “Graphing Performance Data from NetApp”.  You need to gather time and CPU data from DFM/OnCommand Core.  This is how you dump out data:

So, we get some data that looks like this:

The problem with this is the dashed lines, and also the characters in the header “netapp1:avg_processor_busy”.

Now, we go back to R-Studio, and load up the libraries we installed:

So what does this mean? Well… 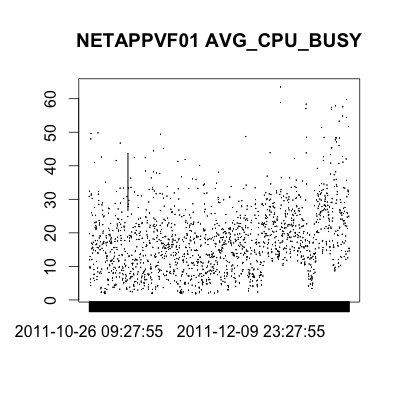 This is not very pretty or useful.  We can’t carve it up.  Thats why we want to goto 3D!

I like to use this data as a new variable… netappdr01.3col

The big change here is we are making a new variable p, and forcing it into a timestamp from the other column data. 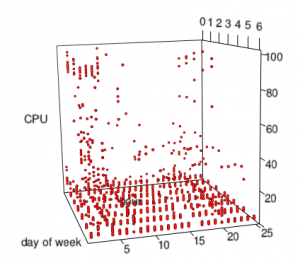 By looking at the data in a 3d representation, we were able to see that their backup application and SnapMirror schedules conflicting was the root cause of a CPU spike on the SAN, but within acceptable limits.

View all posts by jk-47 →
← Does SSD or Thunderbolt matter? (Re: Laptops)
Do not buy your FC HBAs from your server manufacturer! →
Logging In...