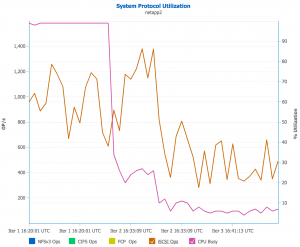 Just an FYI when you jump from Ontap 7-Mode 7.3.x to 8.1.4 you can have a re-occurrence of the Netapp bug 568758 which had to do with block deletes killing performance and spiking CPU due to serialization of volume cleanup processes. (Even though NetApp ‘fixed’ this bug in 8.1.4 from happening new, the snaps on the volumes in a certain way can cause it to crop up. Perfect Storm. )

I just did a headswap from FAS3140 to FAS3220, and what I thought was high CPU due to dedupe runs and Fingerprint updating, at first, ended up lasting through the morning. The customer called me in a panic before I headed out of town.

High CPU, as seen in System Manager’s performance view. Sitting at 100% all morning. Even though real AVG is just 33% and the issue isn’t a major meltdown.

I never ever ever trust any CPU information because most collect the wrong counter to be useful. ok let’s look deeper.

Well, now my customer is all freaked to hell. CPU3 is pegged and the “ANY” or CPU Domain is 100%. Let’s look deeper wtf is going on!

I looked to see if throttling settings were set right. This has cause major CPU issues on other systems in the past.

We’ll crap. What could be wrong.

Screw this, let’s get crazy.

WAFL_DELAYED_FREE_WO ?? Awwww bawls. This is going to screw my day up. So much for sleep or food any time soon.

Well, how’s about that crap. boooo ya!!!